Above My Head, Beneath My Feet (Head-Lines)

- July 08, 2011
A Satellite Navigation System for Electric Cars Bring me around to peace. Deliver my message toward Love. Cart in my kind’s flaccid limbs. Carry my death-weighted tongue nearest to the depleted peace. Navigate the wobbling orb that she might hold me anon, and, with her love, carry me to weeping, bring me to remember the worship of her. My kind has forgone creation’s gravity and now dangles at the mercy of Love. US Broke International Law by executing Mexican National, says, U.N. Will I make it back from here? Will my mind walk upon fertile land or will I execute the world’s terror with my tall sickles cutting through Love, the unbendable screens flickering an SOS… Police say man kills 7 people, including daughter, then himself The bullet has found its mark so many times. The flesh and blood of creation groans. The darkness wears a scarf nearest my throat as I swing the barrel around to face me. 884 million people lack access to safe water supplies. 3.575 million people die
Post a Comment
read the poem

A Pair of Eyes

The wind blew through the garden, the breath of creation exhaling its storm. Droplets of water laughed out loud their aria as they bounced off the cabbage leaves. If love were to encompass the earth, war would have no place to commence, it’s thinning ranks would wail and bellow as high out of the water grew rainbows. Funny how cabbage have cyclopean shells, huh? I’ve a pair of eyes, yet I've been blind to a world chock full of rich tyrants and poor thieves, both with eyes closed up tighter than hell, clanking their fat fingers over stolen gold, clacking their fat mouths over want, trembling their fists in fear and agony leaving me eyeless to war. Peace must come from the seat of unity. Peace is what eludes my kind. What of your love? Tortured by my gnashing teeth. Then speak more of your peace. Peace cannot be owned. Love, being part of peace, is also joyously free, it's my thoughts that pay the ferryman. I've failed Peace. I've failed Love. No.
Post a Comment
read the poem 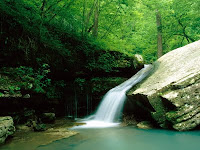 ( Green AR by the Day ) ( Casey Anthony Found Not Guilty of Daughter’s Murder ) I’ve much graver things to think upon than my greed. The look on the river’s face as neglect sifts through reminds me of a scowling beast waiting for Love to enter, to be released of its long sentence, to be found culpable, guilty until proven innocent by a jury of billions. It’s no different than a fouled and substandard justice meting out unfair and disproportionate punishments. It’s not as easy as, “You win some, you lose some!”, I must take responsibility for the mess I’ve made. In the mean time, let me continue filling my mind up with the breadth of dullness, the caverns of shame, the amassed ocean of the flesh and bone of my cousins as neglect fills the lungs with dirty water and washes this all away. © 2011 by mark prime
Post a Comment
read the poem 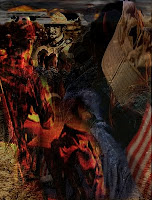 Flags again are sensed in empty gestures, tied to so many unimaginable transport, stabbed in America’s brittle lawns, impaled deep in the freshly wet green of wealth, staggered and airless in the crying fields, flapped against pickup truck and Humvee; nationalism etched in freshly waxed exterior to twisted frame of the fallen and dead ideals. Empire's lifting broken families into the air, aloft in the explosion of mourning without comprehending such rage. The dead, suspended in bomb's brown sky. Children are odes instead of laughter, funerals instead of schools, as fear invades their ambitious eyes draped in the fabric of war. Empire's lifting children up to casualty while its flags they must their flying! Hymns of righteousness must be sung, anthems exploded, void of comprehension. Flags fan the air where shrapnel pierces, penetrates the steel shell of lust, pitching compassion into the oily cloud racking torturous battles upon the world. There is no national an
Post a Comment
read the poem

"Casey Anthony decided on June 16th that something had to be sacrificed ... . She took (Caylee's) life and put her in the trunk (of her car) and forgot about her," Prosecutor Jeff Ashton told jurors in the seven-week murder trial. Closing arguments in the case opened on Sunday morning. If convicted of first-degree murder, Casey Anthony could face the death penalty. ( Read more... ) ~ “Monster!” “Awful!” “Terrible!” “Horrible!” “Murderer!” A little girl's life cut short reduced to a memory; her innocent smile, her laughter and budding love. O! What immense bravery to snuff out an infant, the flesh and blood of the breathing creation! War is not like that. There is no sentence, save for the one conjured in foul wretchedness. Children are murdered without so much as a trace, tossed to the desert garden beneath the Nakhla . Foul animals can scream, blubber about one child for years. Why remain silent of one hundred and one? Why are they not shaken, distrau
Post a Comment
read the poem
More posts