- July 12, 2006
Scores dead in Mumbai train bombs More than 160 people have been killed and 460 injured by seven bombs on the train network in the Indian financial capital Mumbai (Bombay), police say. Across the street from the Mumbai Western Railway, the station was scattered with fractured love, with shredded hope of cleaved flowers, dead mice, angry servants; things we could kill with our own bombs or hands or fear, given time. Children waiting, mothers, fathers- transient- passing- gone. Waiting. Hungry; hungry for work or worship… whichever came first, but not death blasting its marked solitude of splintered joy in moist fragrance, pierced skin the color of kings wrapped in flags. Copyright © 2006 mrp / thepoetryman
Post a Comment
read the poem

Man, His Sheep and Humanity
(A one-man, one-ogre, one-act play) 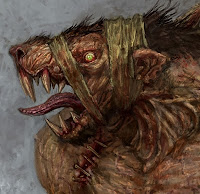 Man (and his sheep) face off against Humanity... (Lucas.Hardi.org ) (VOICEOVER, an eight-thousand year old woman, enters center stage. NARRATOR and SIDEKICK, an average sized pair of fools, come bumbling along after.) VOICEOVER: Man, His Sheep and Humanity are bathing in the blood of the shuddering people. Man’s kinship is breathing near the heart of truth, it is panting, eager and trembling near the stone  that weighs down love.  Quell their rage, said the wind.  Ready them for an infuriated ocean, said the rain.  Steady quaking limbs ahead of death, said the forest.  Pray with our loftiness for man’s love, said the stars.  Our instruction’s come too late, said the dust. NARRATOR: I'm not so sure about all of that, but I am the narrator of the play you’re witnessing unfold  before you. Try not to confuse me with voiceover . Voiceover is purely a directional component to keep the action flowing, nothing more and nothing less. VOICEOVER: Narrator is the curmudgeonly type; n
read the poem

ONCE UPON A TIME IN AMERICA