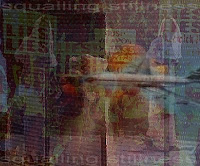 With the minuscule world’s squalling stillness erupting solidly through the callous smoothness is it possible to downright believe the upright deceit, to misunderstand its audacious correctness? This finite universe lashes kindly against its void. Words are meaningless in the silent pertinence, the smiling and dismal days writhe still of wishes and turn back goodness upon their deviant constancy… How could words have lost their meaning that day? Why is nothing to be believed after the plane’s shadows? Have they so ruthlessly shattered principles that even language holds no meaning? Is it possible to conceive serenity lying in the fatal position? Is it possible to erect peace with words bent in war? Fighting for freedom while freedom itself falls away is sign that the shrieking birds toppled more than just the towers… Copyright © 2006 markrprime / thepoetryman
read the poem
More posts